Fall is one of my favorite times of year.  The crisp air, leaves changing color, football, sweater weather, apple & pumpkin flavored treats, and of course my all time favorite, curling up with a good book on a chilly night!  I love nothing more than cracking the windows, letting the cool breeze in the house, curling up under a blanket, and diving into a new book and meeting new characters.

So to celebrate the beginning of fall, the price of The Other Side of Later has dropped to 99¢.  I hope you add it to your fall reading list and enjoy it at this special price!

The Other Side of Later is available on Amazon.

Four years ago on the 10th anniversary of the September 11th attacks, I shared the following post on my personal blog.  I thought it was fitting to share again today.  May we always remember and never forget that fateful day.  God Bless the USA. 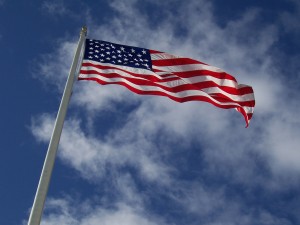 “Where were you when the world stopped turning that September day
Out in the yard with your wife and children
Working on some stage in LA
Did you stand there in shock at the site of
That black smoke rising against that blue sky
Did you shout out in anger
In fear for your neighbor
Or did you just sit down and cry..”

It was the Fall semester of my sophomore year of college.  I was 19.  Unlike most days, I was the only one of my roommates who did not have an early class that Tuesday.  However, being the early riser I am, I was up, showered, and seated at my computer by 8:50 a.m.  Within moments of sitting down, I received an IM from a classmate that said “Hey, a plane just crashed into one of the World Trade Center buildings.”  I forget my exact response, but it was something to the effect of “What are you talking about?”  In my head, I was thinking planes can’t get that close to those towers.  Then the response came “Go to Yahoo’s homepage.”  I did and saw the headline and picture.

I immediately left my computer and went out to the living area of our apartment and turned on the Today Show.  Katie Couric and Matt Lauer were reporting the news live as it came in.  I stood watching alone in the apartment for what had to be 7 or 8 minutes.  Then it happened.  The moment I knew the world would never be the same because this was no accident.  The second plane hit the South Tower, and I saw it on TV.

Each year, I remember September 11, 2001 like it was yesterday.  I remember the maroon American Eagle tank top and dark wash Express jeans I was wearing; I remember one of my roommates crying on the phone as she tried to track down family who worked in Lower Manhattan (yes, thankfully, they were all okay.); I remember my AOL Instant Messenger away message that evening was “It’s incomprehensible!” typed in red and blue text.  In some ways, I think it still is.  The shock of the events from 10 years ago has worn off, but at times, it still is hard to grasp.

My heart still aches for the victims, and I pray for them and their families.  I’m still in awe of the bravery and heroism of the thousands of first responders, who worked night and day to help their fellow citizens – neighbors and strangers alike.  My heart swells with pride when I think and remember the sense of community and patriotism that rippled through the country.  We wore red, white, and blue, we waved American flags, we prayed together, and we helped each other heal.

At 19, I saw the world change right before my eyes.  Each year, I make it a point to remember that fateful day.  I remember the ones lost; I remember the heroes; I remember how this great country rallied at one of its darkest moments.

“Where were you when the world stopped turning that September day…”

I know.  I know.  Another post or tweet about the beach or Jersey Shore?  I promise there’s more to me and The Other Side of Later than the little southeastern corner of the Garden State that I love so much.  But it’s Labor Day weekend so you’ll have to let me indulge just one last time for the summer.

Labor Day has always marked the unofficial end of summer at the Jersey Shore.  As a kid, my grandfather would always tell me we were “locking up the beach” for the year when we left on Labor Day.  You’ll find that phrase in The Other Side of Later as well as a scene of Julia and her family and friends celebrating the unofficial end of the summer season on the beach.  It’s very much like the one my family, friends, and I create each and every Labor Day.

Labor Day on the beach at the Jersey Shore was a little bit of a production. It was the unofficial last day of summer. For years, the regular beach crew would have a little party. Over time, the little party grew into a bit of an extravaganza with close to 25 people. There were plenty of snacks, a cooler of soda, and we ordered subs. When the weather cooperated, it was the perfect time to be on the beach. Early September when all of the shoebies had departed for the summer; only the locals were left to enjoy it.

The Other Side of Later is available on Amazon.