Have you ever run away from something or someone because it felt too right?  Maybe too perfect?  If so, Julia can definitely relate!  In her 28 years, she had been dealt a poor hand when it comes to relationships so the possibility of any guy – let alone one who seems so right her – has her running in the opposite direction.

Today, I’m sharing another one of my favorite quotes from The Other Side of Later.  This one especially really gives the reader insight into Julia’s mind. 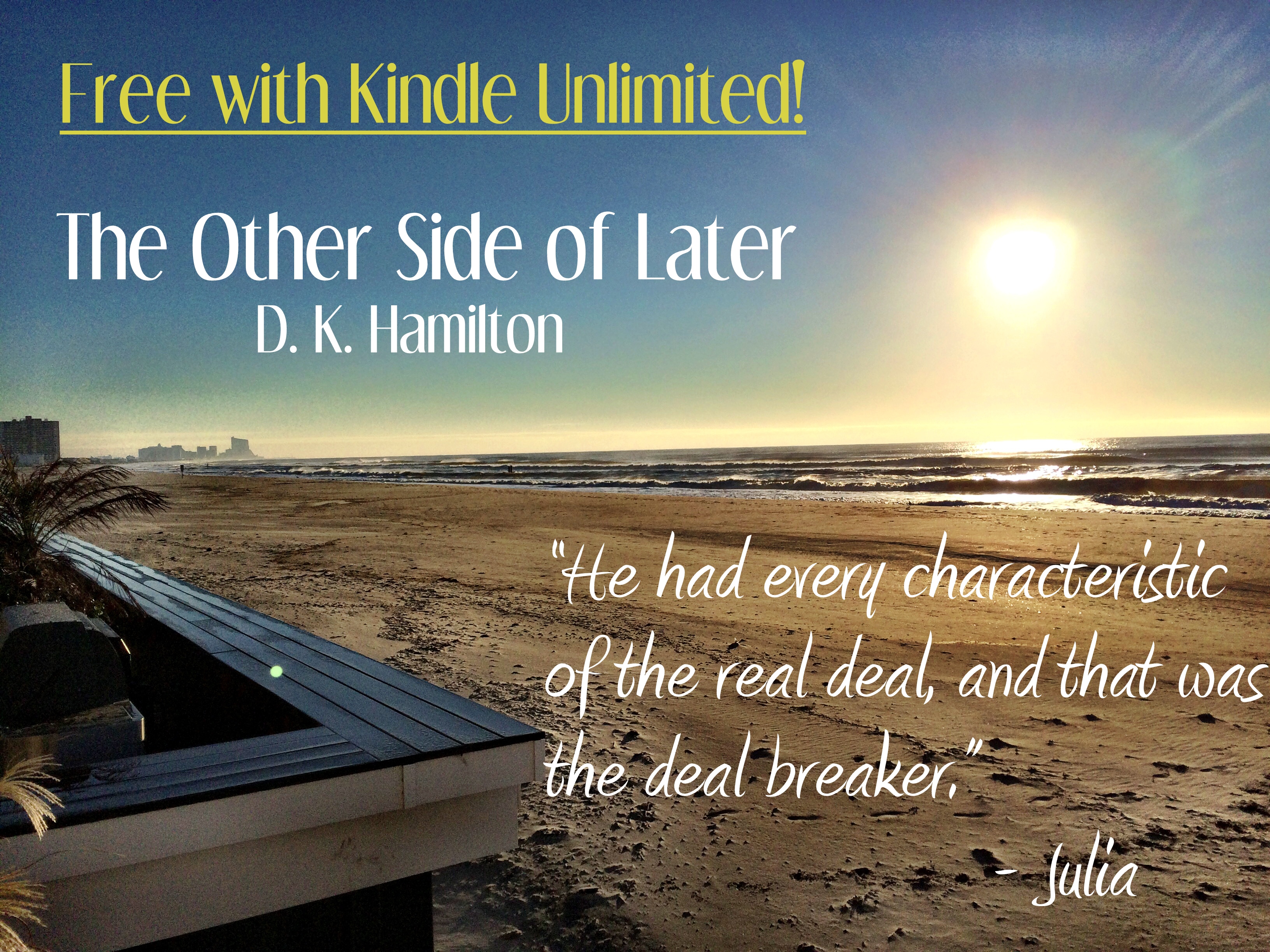 If you’d like to read more about Julia’s story, checkout The Other Side of Later on Amazon for only 99¢ 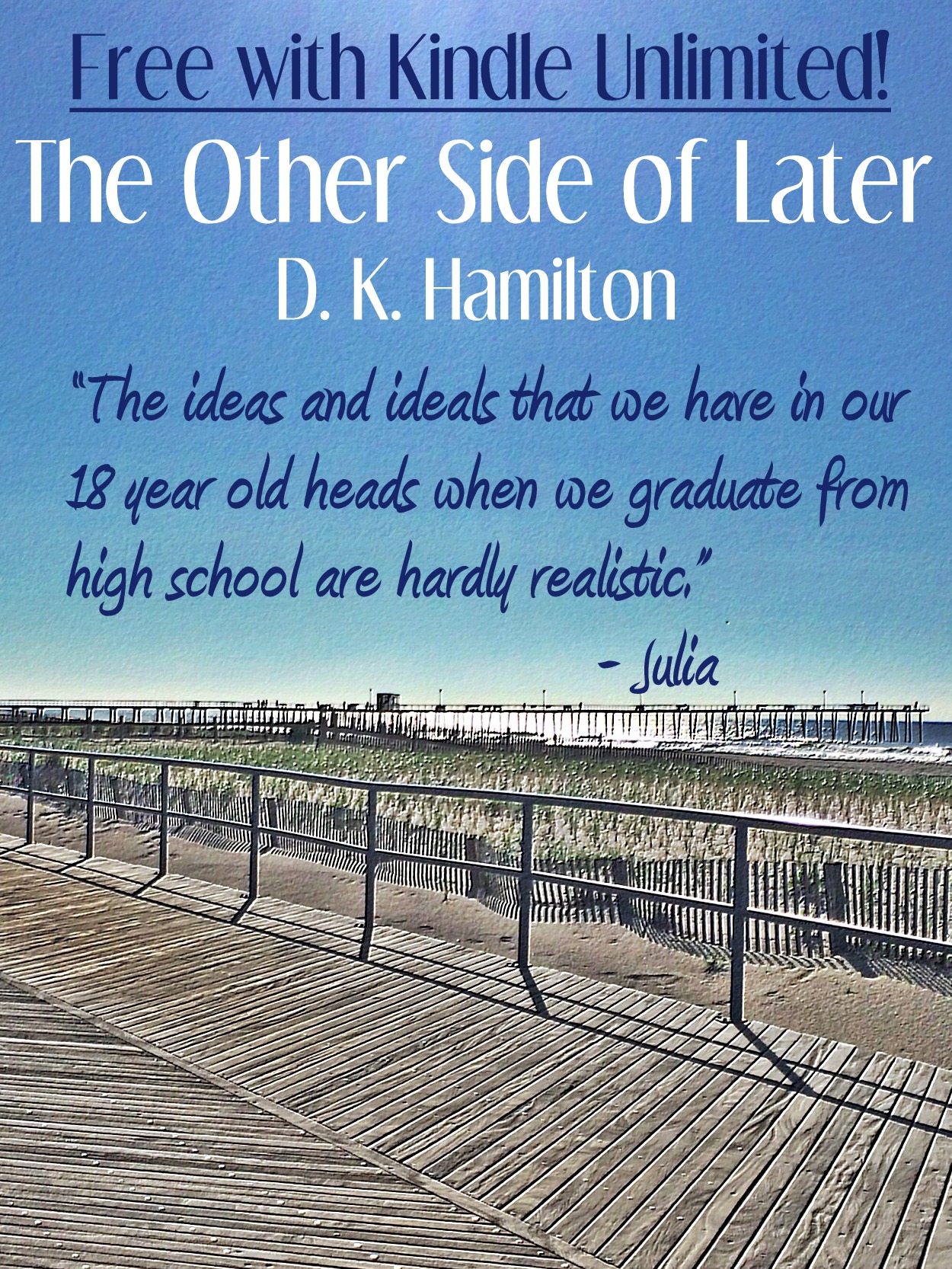 Who else is excited for warmer days, brilliant sunshine, and spring weather?  After a little tease of spring back in March, the past few chilly weeks have had me wishing for warmer weather.  When the weather gets warmer, I always start thinking about which books I’m going to toss in my beach bag or load on my Kindle for late spring and eventually summer days on the beach.  As I’ve mentioned before, The Other Side of Later is set in a small town at the Jersey Shore, where the beach is a part of life.  I hope you enjoy this sneak peek! 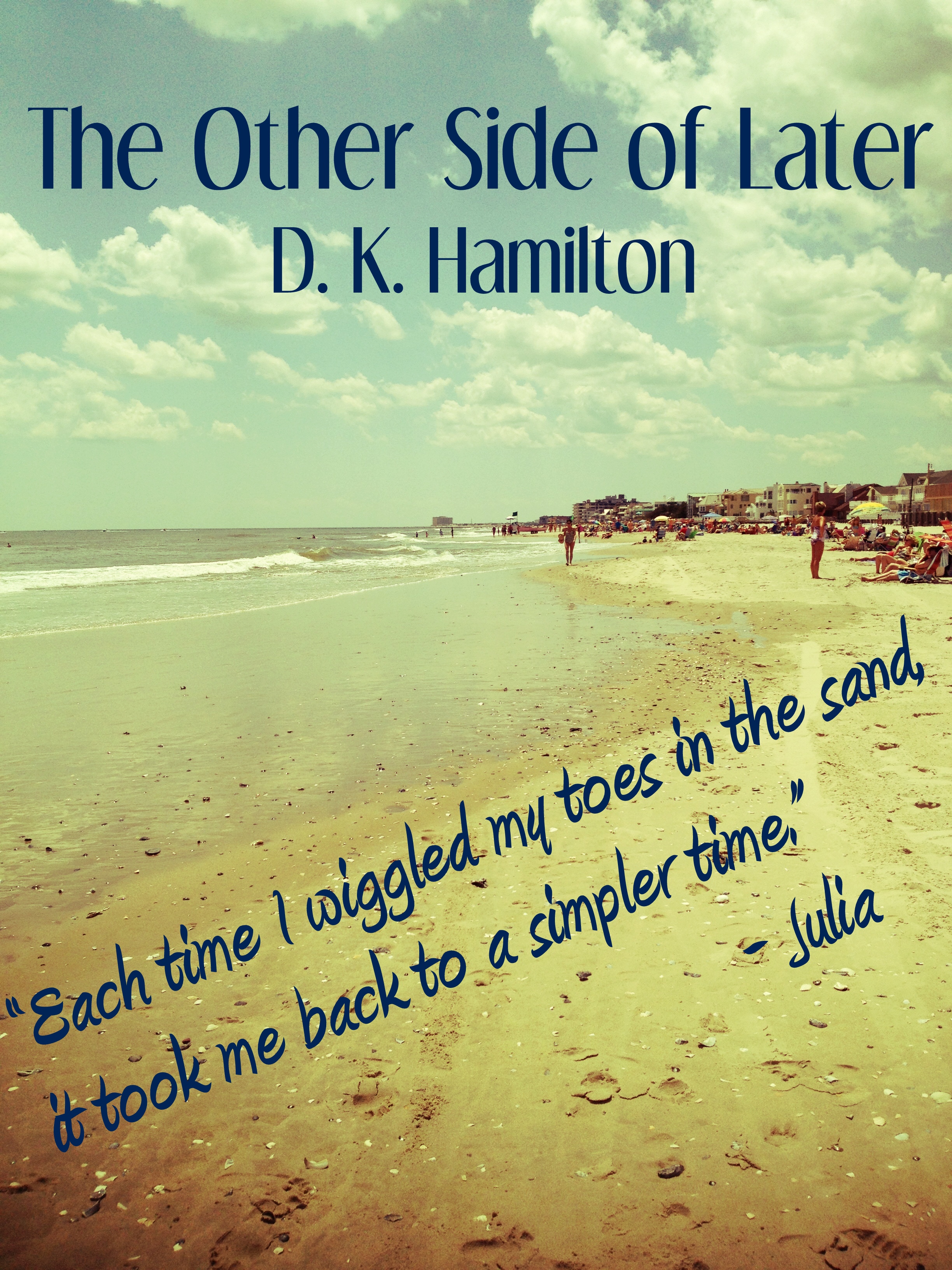 Some of my favorite childhood memories are from summer days at the beach.  Squawking seagulls, rolling waves, ice cream men ringing their bells from the bulkhead, and lifeguard whistles comprised the soundtrack of my summers growing up.  It may sound rather cliché, but through the craziness of my early 20s, I always found comfort in living – and raising my son – in the same place that held so many good memories for me.  Each time I wiggled my toes in the sand, it took me back to a simpler time.

When my brother, Luke, and I were really young, weekends were family days at the beach.  Our parents, grandparents, neighbors – Mr. and Mrs. Johnson – and their children all congregated at the 17th Street beach by noon and we didn’t dream of rinsing off and packing up until well past 5.  We ate my mom’s peanut butter and jelly sandwiches, learned to body surf in the ocean with my dad, sat on our grandmother’s lap to get some much needed shade under her umbrella, and somehow, without fail, persuaded my grandfather to dig us a big hole to play in.

As we got older, summer jobs and social lives changed the routine.  Our work schedules didn’t always allow us to be at the beach on the weekends.  We didn’t dig holes and I certainly didn’t body surf once I graduated from one piece suits to bikinis.  Instead of my mom’s peanut butter sandwiches, my friends and I would walk to Loretta’s, the neighborhood diner, for lunch, and breaks from the sun were few and far between as we took turns paddling away from shore in the Johnsons’ ocean kayaks.

The activities changed, but seagulls still squawked, waves still crashed against the sand, ice cream men still ran their bells, and the lifeguards still blew their whistles.  The sounds were exactly the same each time I climbed the steps over the bulkhead and onto the beach.

I won’t pretend to remember where I was or if I even watched the first episode of American Idol back in 2002.  In fact, those who know me and know how much of an avid Idol fan I’ve been through the years would probably be surprised to learn that I didn’t really watch the freshman season.  I heard snips of it as I walked by my mom’s room, and my college roommates and I watched the last 10 minutes of the finale when Kelly Clarkson was announced the winner.  But it wasn’t until the next spring when Season 2 aired that I really became hooked.  Maybe it was talent; maybe it was the mesh of personalities; maybe it was just the perfect distraction a college student needed on Tuesday and Wednesday nights between solving integrals and writing lab reports.  Regardless of the reason, the talents of Clay, Ruben, Kimberly, and the entire top 12 along with the banter of Simon, Paula, Randy, and Ryan, had me tune in week after week from January through May.  And after that, I was an Idol fan.

Last spring, when Fox announced this season would be the final one for Idol, I was filled with mixed emotions.  Anyone could see the show had pretty much run its course.  Through the last few seasons, major changes had been made to try to keep it afloat:  switching nights from Tuesday/Wednesday to Wednesday/Thursday, recruiting big-time record executives to mentor the finalists throughout the season, and ultimately consolidating the two night showcase into a one night a week show.  However, a pang of nostalgia hit when I thought about Idol coming to an end.  In the time I had been a fan, I had met my husband, graduated college, went to grad school, bought a house, got married, and now I’m even expecting my first child.  A lot can happen in 14 years and every spring, Idol was a part of it.

I reminisced (in other words rewatched on You Tube!) about my favorite performances – Carrie’s rendition of Heart’s “Alone,” Constantine’s “Bohemian Rhapsody,” and Chris Daughtry’s spin on Elvis’s “Suspicious Minds” just to name a few.  I remembered the moments that were bigger than just a reality TV show – the Season 2 Top 10 performing “God Bless the USA” just days after the United States invaded Iraq in 2003 and the first installment of Idol Gives Back.  I thought about how a group of us at work would discuss the Internet crazed sites of Dial Idol and Vote for the Worst every Wednesday morning back in the mid-2000s.  Of course, I’d be remiss if I forgot about the harsh and sometimes cringe worthy critiques from Simon or the trademark slogans that became a part of pop culture like Randy proclaiming a particular contestant was “in it to win it!”

If I’m being honest, I haven’t really watched this season like I have for the past 13.  The format was really different – Idol alumni duets, semi-finals in an old church, multiple eliminations in one night.  It felt different – too different, and I guess it had to be in order to accommodate the abbreviated season.  But I just couldn’t get hooked like I did before.  Maybe it’s appropriate.  The few auditions I did watch all touted that this year’s winner would be the book end to Kelly’s inaugural season win, and I didn’t watch much of that season either.  How’s that for symmetry?

But some things haven’t changed.  The show is still about young, talented artists, and Ryan still opens each episode with the trademark “This is American Idol.”  While I can’t remember watching the first episode of Idol or hearing Ryan utter those famous words in 2002, I know I’ll remember watching the last and hearing him say “Kieran, dim the lights” before announcing the winner and wishing America goodnight one last time.