About a month ago, my family and close friends took a trip to Walt Disney World in Florida. We’re all frequent Disney goers, but each trip, leaves me in a little bit of awe. No, I’m not a disillusioned adult that believes all troubles go away with a little pixie dust and a walk down Main Street in the Magic Kingdom. But I am a fascinated observer of how one man’s dream transformed into everything that is synonymous with his last name today.

At Disney World’s Hollywood Studios, the Walt Disney: One Man’s Dream attraction tells his story.  Mr. Disney was truly an innovator with a vision far ahead of his time.  He saw Disneyland, which opened in Anaheim, CA in 1955 as a clean, family oriented amusement park, as his prototype.  He envisioned something better and bigger so he bought a tract of land in Central Florida. What is now known as Walt Disney World was originally labeled as the Florida Project. He imagined a more efficient city through better planning so he developed the concept of EPCOT – Environmental Prototype Community of Tomorrow. EPCOT was Mr. Disney’s focus of the Florida Project.

Sadly, Mr. Disney passed away before the Florida Project was created, and the EPCOT he envisioned was never developed.  However, Walt Disney World was built with the philosophies of Walt always in mind.  From its opening day in 1971 through today, visitors from around the world are welcomed into a world with clean streets and walkways, transportation with efficiency second to none, and innovations on the cutting edge of today’s technological advances.

So what am I getting at? Is this just a post about my fascination with Walt Disney? No, I have a point. There have been so many highs and lows on this writing and self-publishing adventure. Days when I have a few hours I can dedicate to writing and the words just flow onto paper, I get such a rush! I feel I’m doing what I’m meant to do. Or times when I read a positive review about The Other Side of Later, I beam from ear to ear for hours. But not all days can be that great. Like all things in life, I have to take the good with the bad. The rejections from review sites and the slow and somewhat frustrating self-publishing marketing process have been grueling some days.

It’s those days – the really frustrating ones – that I think about Mr. Disney.

“If you can dream it, you can do it. Always remember that this whole thing was started with a dream and a mouse.”      – Walt Disney

So as walked down Main Street in the Magic Kingdom and had pixie dust in my hair, I looked straight ahead at Cinderella’s Castle and the statue of Walt Disney holding Mickey Mouse’s hand. I thought about a man from the Midwest, who had a sketch of a mouse and a dream. And then I looked at my surroundings and I realized I was standing in the middle of that man’s dream. 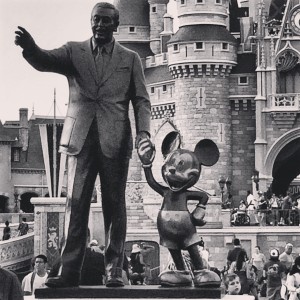 When days get frustrating, I think of that moment. I look at this picture. And I remember if I can dream it, I can do it.