About two years ago, I wrote a post about how the meet cute of Julia and Drew came to be. However, this past weekend, I went for a long run and went past the park and gazebo, which were the inspiration for the scene. (Check out the picture below!) So I thought I’d revisit it and give you a little sneak peek of the scene too! 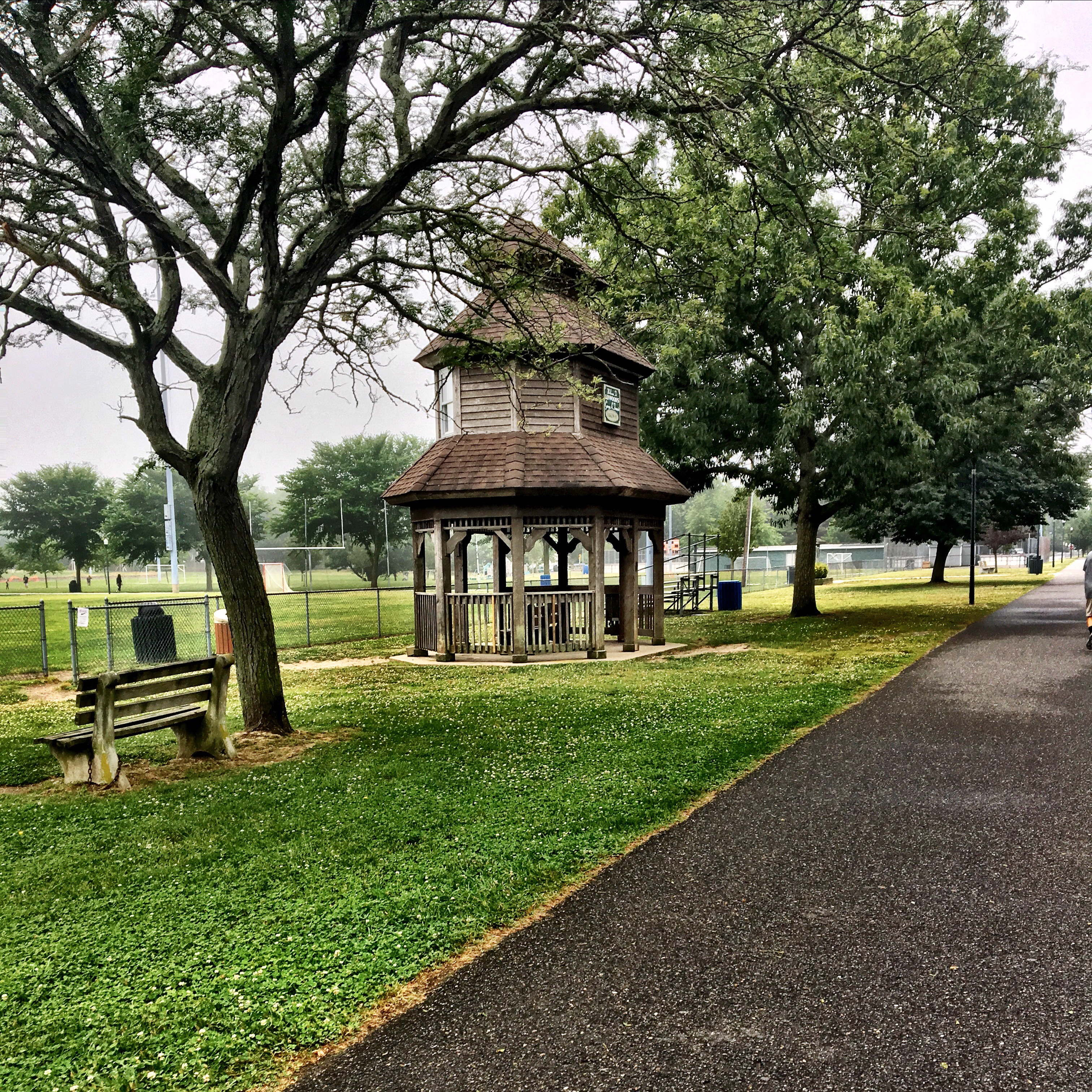 “The late August humidity was oppressive. The air felt heavy. It was like a snowsuit clung to my legs with every stride. As I reached the bike path surrounding the park, the sun disappeared behind clouds rolling in from the west. The shade was a welcome change and helped take my mind off of the heat so I could enjoy the peacefulness of the park.

When Luke and I were young, my dad would take us down to the park after dinner most summer nights. Bill Merina was, and still is, a kid at heart. The three of us created our own version of tag, and the gazebo was home base. I was so young when we played that I don’t remember all the rules, but we ran around and up and down the steps of that gazebo more times than anyone could count. Back then, it was new with fresh varnish to keep it safe from the elements. Now, it looked worn and weather beaten, but it was the perfect place to ride out the storm.

When I reached the small wooden structure, I noticed another runner had taken shelter as well. His back was turned to the entrance as he looked out over the park to watch the storm. I took my cell phone out of my pocket to call my mom, but I had no service. “Damn it!” I cursed. With my outburst, I noticed the other runner turned. “Sorry.” I quickly apologized as I held my cell phone up in the air in every direction possible trying to find some sort of signal. “Of all times not to have a signal.” I mumbled under my breath. “Julia?” The man said. I froze for a second. I knew that voice. It had been a while; heck, it had been a decade, but I knew that voice.”

If I rewind 8 years, there was a hot and humid, August evening when I decided to squeeze in a quick run before thunderstorms swept through. I knew I’d be cutting it close with the dark storm clouds off to the West, but I was certain I had at least 25 minutes for a quick run. Unfortunately, luck wasn’t on my side that day. I was about a mile away from my house when the sky opened up and I had to make a very quick dash to find cover.

I’ll be honest. That night I didn’t think too fondly of the run. My sneakers were completely water logged, and I had had to peel off my soaking wet clothes as soon as I came in the front door as my husband tossed me a towel from upstairs. However, the next day, as I thought about how convenient it would have been to have been near a structure of any kind along the bike path, the premise of Julia and Drew’s meet cute came to me. What if two runners – more specifically, two former classmates – found the same place to take cover during a storm?

From there, the idea for The Other Side of Later took off in my head. I thought about the gazebo by the park I spent many summer nights as a kid. I felt like I caught lightning in a bottle. My mind was in overdrive. I couldn’t type fast enough. Idea after idea flowed onto the screen. That being said, there were rewrites on top of rewrites. Some ideas from the early drafts never panned out. But the circumstances of how Julia and Drew reconnect? That never changed. I knew a summer thunderstorm was the perfect way to start their story.

Check out The Other Side of Later on Amazon.