As I have mentioned before, Emily Giffin is one of my favorite authors.  So this week I have two more of her books to share with you!  Heart of the Matter and Where We Belong are Ms. Giffin’s fifth and sixth novels.  Like all of her previous books, she takes on tough life situations with an interesting perspective.  I hope my reviews do them justice and you give them a try! 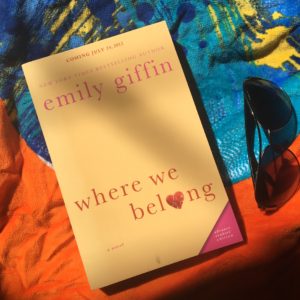 Heart of the Matter

I admit I held off on reading Heart of the Matter for well over a year after its release in 2010 despite being an Emily Giffin fan. The synopsis seemed different from her other books, and I read multiple reviews that weren’t as glowing as the ones for her previous four books. However, I’d been hooked on her writing style since I had read Something Borrowed. She has the innate ability to eloquently portray real life circumstances through the actions of her characters. I know many authors (if not most) exhibit the same skill set, but what I’ve found separates Ms. Giffin from the rest is her knack to not necessarily turn the tables of right and wrong or good and bad, but illustrate how good people with no ill intentions can do the wrong thing. Heart of the Matter is no different.

Tessa and Valerie are two mothers living in the Boston area with little in common until one night, an accident intertwines their lives and flips both of their worlds upside down. Unlike her first four books, Heart of the Matter is told in alternating points of view delivering the story of these two women as they are forced to examine their lives, decisions they’ve made, and what is the heart of the matter.

Heart of the Matter on Amazon
Where We Belong

At 36, life is pretty close to perfect for Marian Caldwell.  Her successful career as a television producer and stable, long term relationship has everyone – including herself – convinced life cannot get much better.  However, one fateful night, life changes for Marian when 18 year old Kirby Rose knocks on her door.  Marian and Kirby travel down an emotional road stirring memories – filled with a young love affair and secrets – Marian thought were buried and forgotten long ago.  Together, both women learn about each other, but more importantly, their journey forces Marian and Kirby to look deep inside themselves and learn who they are.

The storyline of this novel is different than the other Giffin novels I read.  However, I wasn’t disappointed; like always, her writing delivered.  In fact, with each of her novels I read, the clearer it becomes what talent she has for capturing tough life-changing decisions and characterizing the dynamics in a wide array of relationships.  As we all know, life is full of tough decisions.  From the outside looking in, it’s always easy to judge what’s right and what’s wrong.  However, Giffin so eloquently flips that perspective.  What is the rationale when we have to make that decision?  The lines between right and wrong are easily blurred, and we’re left to make decisions and live with the consequences.  As Giffin challenges her readers to look beyond the moral boundaries of right and wrong, Kirby challenges Marian to unlock doors from her past so they can both find where they truly belong.

Where We Belong on Amazon

One fun fact about Where We Belong…I received an advanced signed copy from Emily Giffin! 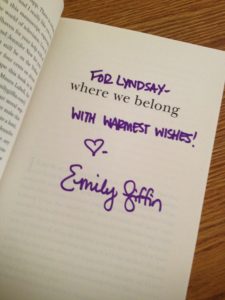 I hope you put both Heart of the Matter and Where We Belong on your reading list!  If you’d like book reviews like this sent directly to you each week, sign-up for my weekly newsletter here!